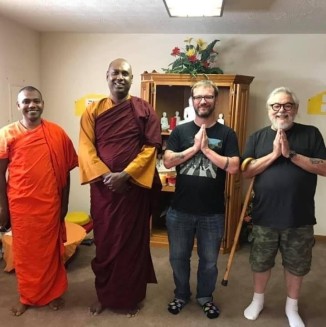 In 2011 he received Meditation Instructor Training from Lama Chuck Stanford. He did some koan study with Sunyananda Dharma in 2013 and spent a very brief period as a zen monk. He learned Mindfulness of Breathing from Santikaro on retreat in 2015. He was trained in Silent Illumination practice by Shi Da Dao in 2016.

In 2018 Daniel received further training in Chan Meditation by YaoXin Shakya and was declared a dharma teacher and chan priest in the Dharma Winds lineage. He was given the name QianMing, which means Supreme Clarity.

Daniel next intends to learn about Vipassana meditation by studying with Venerable Bhante Nanda. Daniel’s philosophy is that teachers should never stop learning.

Every Week at 7pm

Meditation and Discussion. Everyone is welcome.